“A picture tells a thousand words”

I have always loved looking at photos. Not just hunting, fishing and outdoorsy ones but photos of just about anything really. As the above quote implies, each and every photo holds so much information, can sometimes depict a whole story of events and yet often captures just a fraction of a moment in time.

One type of image that has always held particular fascination and appreciation for me are those of ‘birds in flight’ (BIF). It used to astound me how the heck photographers managed to capture images of such fast moving, sometimes very small and unpredictable subjects yet retain in focus and sharp detail of such things as feathers and eyes. My assumption was that these people must have been using top of the line and very expensive cameras and lenses. Having learnt so much about photography, cameras and lenses over the last few years I now know that although a good quality camera and lens will help in attaining a ‘quality’ image of a moving subject, it is more down to technique and how the photographer uses and handles that equipment. In this article I’ll attempt to convey some techniques to capture moving subjects.

Most cameras (and I’m referring to DSLRs here mainly) will have two or three autofocus modes. The first and usually the default setting is intended for subjects that are stationary and where the camera-to-subject distance will not change in the time between when the autofocus system acquires focus and making the exposure. ie, for still subjects. It works by locking the focus as soon as the camera has confirmed that focus. On a Nikon DSLR it is denoted by ‘AF-S’ (S = single) whereas the Canon range of DSLRs call it ‘One shot’.

The second is a predictive type of autofocus designed specifically for moving subjects. This works by predicting where the subject will be ever so slightly in the future. It calculates this based on estimates of the speed of the subject from previous focus distances and will then focus at this predicted distance in advance. Naturally the accuracy will be greater when the subject is flying/moving at a constant speed and on a consistent line. Nikon’s version goes by ‘AF-C (C = continuous) while Canon’s name for this system is AI servo (AI = artificial intelligence).

There is often a third mode which uses a combination of both systems. For example, when photographing a static subject that has the potential to suddenly become active or mobile (a bird that may suddenly take flight). This third option will initially use the ‘stationary’ mode but will kick into the predictive mode when the bird or animal moves. The general consensus is that it is a very inaccurate type of system and is mostly ignored by the majority of wildlife photographers. My advice is to use one or the other of the first two modes according to the situation and what you’re trying to capture.

‘Locking on’ (focus) is the first step in the process of obtaining good images of moving subjects. The speed and accuracy of attaining this focus will vary greatly depending on which make and model of camera you possess but all should be able to do it to an acceptable degree. To help the camera with its accuracy select the ‘single, centre focus point’ from the focus point selection menu. By using this one focus point you retain a heck of a lot more control over what the camera picks up and focuses on.

Activating (selecting) the full range of focus points does have its advantages in certain situations however. When set like this, a camera is designed to prioritise the centre focus point. If a moving subject happens to move away from this point (maybe due to the operator’s unsteady panning) then the surrounding focus points will then pick it up or ‘take over’. Selecting all points in this way is really only ideal when your background is completely uncluttered such as sky or a large expanse of water as there are no other objects, subjects or busy backgrounds to confuse the system’s focus points.

Slow moving and predictable subjects such as cars or bicycles are always good to start out on until you have techniques sorted out. With the camera up to your eye, the obvious first thing to achieve is finding it in the viewfinder. Now half press the shutter button to activate the focus system ensuring that centre focus point is maintained on the subject. Higher end cameras will lock onto a subject a lot faster and more accurately than a lesser model. Once focus on the subject has been attained you should be able to see that sharp focus continually adjusting itself as you pan with the car or bike. Continue a full press of the shutter button once the predictive focus is ‘working’ (tracking) to capture the image.

High speed continuous shooting or ‘burst’ mode comes into its own on moving subjects as this setting gives you the ability to rattle off a quick fire burst of shots as you pan with the bird or animal. Positives using this option include being able to catch different stages of an animal’s gait or in the case of birds, a variety of wing positions while also ensuring better odds of getting an in focus image. Believe me, there will be heaps of ‘deletes’ in the early stages. 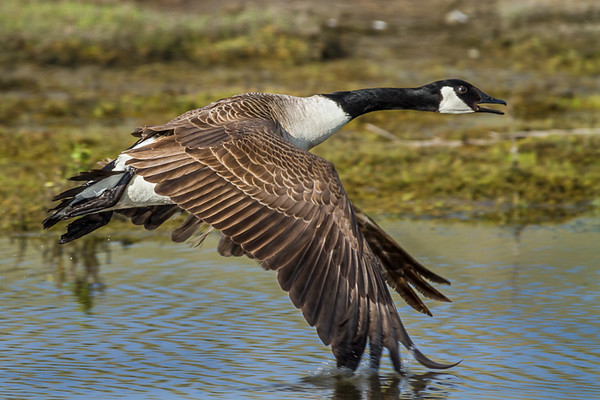 Camera menu showing the four main metering modes and the symbols associated with each.

All a tad confusing really but bear with me on this one.

Now, imagine yourself panning the camera following your intended target. As you swing round, the light entering the camera will be constantly changing requiring constantly changing settings to get a good exposure, right? This tells us that the ‘evaluative’ metering mode will not work well on moving subjects. In fact only the ‘spot’ metering will get you anywhere near consistency of exposure and only then if you are able to keep that centre 2.5% of the viewfinder exactly on the bird or animal so the camera gets a reading off the target you are trying to expose properly. All very daunting, eh ?! It need not be however. Moving subject photography benefits hugely from using the manual mode (’M’ on the dial). Take control away from the camera’s totally confused metering system and dial in your own ‘big three’ settings. The best way to achieve the correct settings is to meter off either your target when it is stationary (deer feeding before it moves) or off another object or subject that is very similar in colour and contrast. Ideally the object/subject (that the reading is being taken off) should be in the same light as where you think the moving target will be or as similar to it as possible. 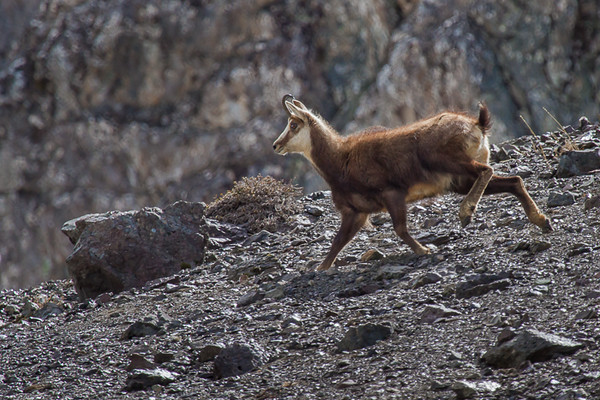 A long but successful stalk had me in very close to a group of chamois. As they were unaware of me, I had the luxury of time and was able to take ‘readings’ off stationary animals. This paid off when they eventually high tailed it as manual settings were already dialled in so it was a quick and easy switch to ‘AI servo’ (predictive focusing) to capture this image of a chamois on the run …. Marlborough high country.

Often, time will be against you in regards to adjusting optimal settings. Perhaps you’re quietly stalking without knowing when a suitable moving subject will present it self. In these situations just revert back to either aperture priority mode (‘Av’) using a very wide aperture or shutter priority (‘Tv’) selecting a fast shutter speed. In both circumstances make sure the spot metering is employed. As long as you’re accurate with the placement of that centre metering ‘dot’ while tracking, you should have a better than average chance of coming away with a couple of keepers.

It kind of goes without saying that to capture in focus, sharp images of anything moving a fast shutter speed is required. In the above camera setting scenarios your main objective is to get the fastest shutter speed possible. Each and every bird or animal will be moving at different speeds but the general rule of thumb for birds and wildlife is a minimum of 1/1600 of a second. In manual mode for example, make the shutter speed setting your first adjustment then alter the aperture and ISO accordingly to gain that all important correct exposure whereas ‘Av’ will achieve the fastest shutter speed by opening the aperture as wide as it will go.

Shutter speed may also be used in a creative manner. Have a look at the image below and note how all movement of the Kotuku has been frozen. Wing motion, individual feather, head, body and feet movement have all been ‘stopped’ absolutely.

Blurriness in any image automatically means movement either within the scene or subject or at the other end of the equation, the camera. Now, by using a slightly slower shutter speed to intentionally blur parts of your subject it is possible to convey ‘implied motion’ in an image. That part of a subject which is the fastest moving will of course be the first thing to blur when using a shutter speed that is a tad too slow to freeze motion completely. In the case of a BIF, the wing tips blur first when dropping the shutter speed. So what we end up with is an image that more dramatically portrays the sense of movement, motion or velocity than say just a BIF with spread wings. See image below.

Incoming onto a nest, this Spotted Shag gives a much better sense of movement or motion with blurred wing tips …. Kaikoura Coast.

There is another, much easier method to catch moving animals and birds. This technique relies upon the subject being consistent and predictable in its line of travel but does not produce a very high keeper rate in your shots. The word ‘consistent’ and wildlife don’t generally go hand in hand but there are odd occasions when you know where your subject will be or pass through at any given time. Flight paths of birds, a spot lower on the ridge that a deer is trotting down or a clearing that you anticipate a pig running through.

Switch back to the standard ‘single’ or ‘one shot’ focus mode. Half press the shutter button to acquire and lock focus on that spot or space that you expect your subject to pass over or through. Now it all comes down to your timing. Just before your subject is about to pass through the point you focused on, hit the shutter. You need to fire the shutter just before as shutter lag will cause you to miss the shot if you hit it at the point they pass through your focus point. To further increase your chances of gaining an in focus shot make use of the continuous shooting mode. A quick spurt of a few shots should ensure at least one of them won’t be deleted on the spot due to blurriness. Be sure to start the burst a smidge before the animal passes your focus area and continue until just after it has passed it.

This whole concept of photographing bird and animal movement outlined above is a very challenging area of wildlife photography. The tracking and panning method using continuous predictive focusing can be reasonably difficult to master so the first few attempts might be a bit disappointing. As with so many things though practice, practice, practice and the results will eventually come. I find this area of wildlife photography one of the most rewarding and satisfying ….. I’m sure you will too.